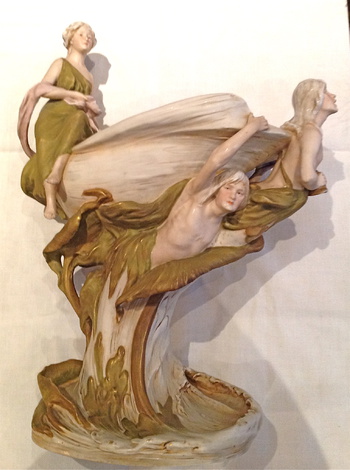 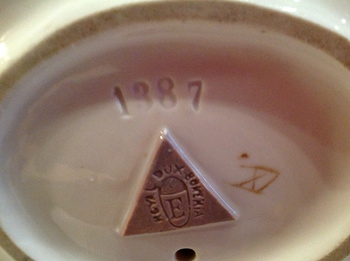 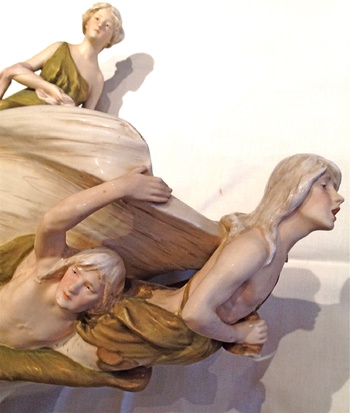 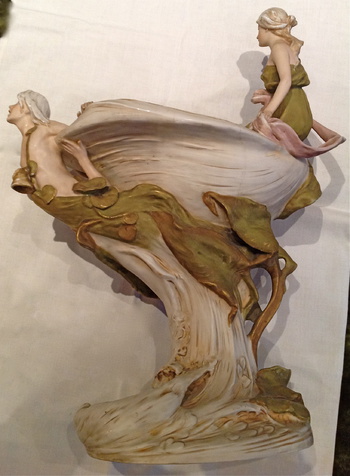 NOTE: The numbers impressed on the bottom refers to the factory mold shape. The XI mark is the modeler's mark. A modeler was paid by the piece and this mark was used to keep tally of a workman's count. (info supplied by "Treasures In Your Attic")

This is a beautiful and rare centerpiece by Royal Dux. You may see others similar but rare if never with three figures. This one has the woman sitting on a massive shell with her scarf blowing in the wind. A mermaid and merman swimming underneath entangled in seaweed as if caring the shell across the sea.

We purchased this piece at a brocante in a small village outside of Paris in 1996.

The Famous Pink Triangle
Royal Dux introduced one of the most distinctive marks ever placed on porcelain, a raised triangle of pink clay. All factory-applied pink triangles–whether from the 19th, 20th or 21st century–are made from a separate piece of pink clay. The pink clay is applied to the base of Royal Dux white clay bodies. The two separate pieces are fused together during firing. There is virtually never the slightest seam or gap between the pink clay of the triangle and the white clay of the piece to which the triangle is applied.
Before WW I, pink triangles were generally, but not always, left in a bisque, or unglazed, finish. Most Art Nouveau figures in matte glaze, for example, usually have bisque triangles. After WW I, Art Deco figures entirely glazed in a high gloss occasionally have glazed triangles. Pieces with gloss glazes after 1950, especially after 1980 are more likely to have some glaze on the triangle. Although bisque triangles are the general rule, there is considerable variation over the years.
Factory triangles are all roughly the same size, about one-half inch per side and raised about one-sixteenth inch thick, rarely more than one-eighth inch thick. Size varies slightly because some original triangles were slightly deformed when damp.
Appearing in all genuine factory-applied raised pink triangles, regardless of age, is "Royal Dux Bohemia." That lettering appears around an oval shape in the center of the triangle. A crosshatch, or grid-like pattern, is at the top of the oval. Even though the country of Bohemia disappeared at the end of WW I, Royal Dux Bohemia remains in the mark to this day.
All factory-applied pink triangles, new or old, are generally very high quality. You almost never find a blurred, indistinct or illegible impressions in factory-applied triangles. Virtually all factory-applied triangles have sharp, clear lettering impressed to an equal depth.
E Impressed Triangle, ca. 1860-WW I
Each of the four periods of production can be roughly identified by changes in marks. In the first period, 1860 to WW I, the letter E is impressed in the center of the pink triangle. E represents Eichler, the founder's surname (see line drawing and photo in Figs. 2-3). The letter in the center of triangles changes over the years. It's important to keep in mind that E is the earliest. A convenient way to remember this is by word association: E is for early.