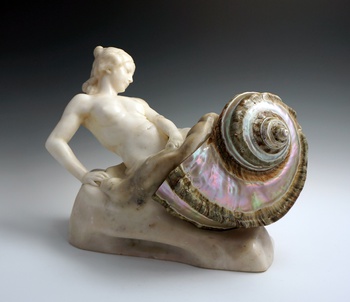 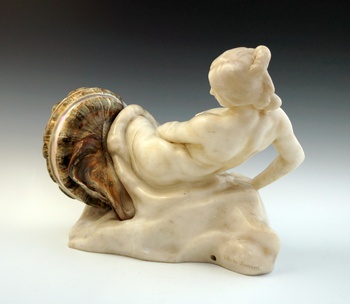 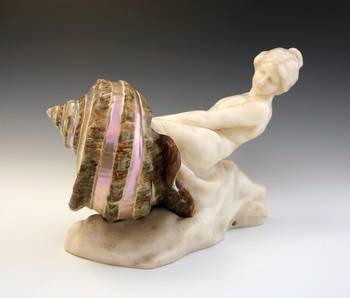 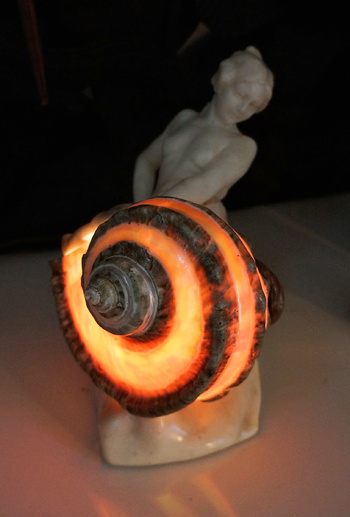 I believe the large carved and polished shell to be that of turbo marmoratus, known as great green turban; a large species of marine gastropod prized for its thick nacreous shell. These large snails live in tropic reefs in the Indian Ocean and tropical western Pacific oceans.

If this is indeed a snail shell, then this piece is example of a strange and rare Viennese/German design metamorphosis motif, which may harken from Japanese mythology, of a demon (oni) who can shape shift from snail to beautiful woman to seek out male victims. This type of dangerous female motif of Japanese origin is certainly in keeping with fin de siecle fascination with the "femme fatale" and Japonisme. See here for another "Snail Girl" example by Jakob Wilhelm (Willy) Meller (circa 1920): http://www.liveauctioneers.com/item/17700724_german-bronze-metamorphosis-or-the-snail-girl

Franz Peleska-Lunard, born 1873 - 1911(?), was a popular sculptor of probably German or Bohemian (Austria/Czech) origin. Most of his known works are from the 1890-1910 period, when Vienna and Berlin were at the centers of active decorative sculptural production. Little is known of Peleska-Lunard, but it is known from documentation that he was active in Berlin in 1907 and he notable for a 1904 popular bronze bust of Beethoven; a version of which is now in the Beethoven Haus Museum in Bonn. Sculpture by Peleska are found signed as Peleshka, F. Peleschka, F. Peleschka-Long, Peleschka-Lunard, and Peleska-Lunard. Many of his works have additional foundry/workshop (?) bronze medallions with a stylized “R.u.M. (Rosenthal und Maeder)” foundry marking.

Another mixed materials sculpture by Peleska-Lunard auctioned off by Sothebys in 2007 carries the same stylized “R.u.M. (Rosenthal und Maeder)” small bronze foundry medallion as found on the bottom of this alabaster work. See here: http://www.sothebys.com/fr/auctions/ecatalogue/lot.476.html/2007/fine-20th-century-design-l07672