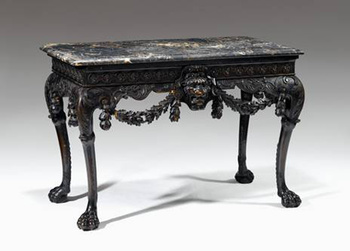 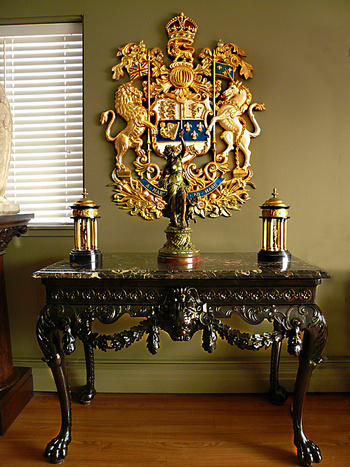 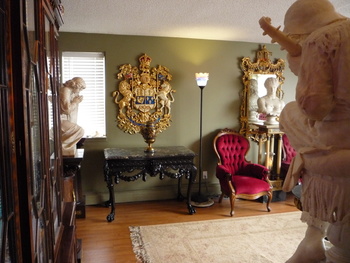 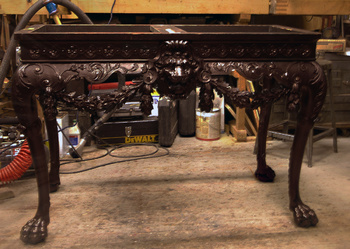 This Irish George II Side Table was one of my purchases for 2008 I believe, but it was 2009 before I received it from Pittsburgh where it had been restored by the best there was, Bernard, who did a fantastic job in the restoration. It had its original finish but I had wanted someone who could restore it to its original glory and bring it back to life. There were a few minor chips and some carving of a swag on the left side was gone, so I had to have that small piece carved in Pittsburgh. It had a large black marble top of the finest quality on top, 33 inches high, by 46 1/2 long and 28 wide. I loved the legs, they look like they could take off running at a moments notice !~

Above the table hangs a 48 inch Coat of Arms of Canada, made from cast iron, but yet in the finest detail relief. I did the restoration of the coat of arms and several coats of gilt leaves of gold throughout. The Canadian Arms came from a dismantled government building in Regina, Saskatchewan, Canada. It weighs between 80 to 110 lbs. and I do have cement walls, so it was easy to hang, I had the walls painted a darker shade of Irish Green to match.

" As you enter my home, you pass through a small entrance hall and enter an opening to the left framed with large scale, marble topped furniture and a large, carved marble, life-size statue. There are statues everywhere. There is an overpowering feeling of solidity and permanence to the " room ". You get the feeling that it has been here forever and that it will always be that way... "
--- something I wrote about my collection and home.

I have some new information about this sideboard or side table, and its twin as I was contacted by one of Rockefellers estate archivers after she saw this post. Usually often these serving tables were made in pairs but I never expected to see this ones twin. It sits in the entrance hall of Kykuit mansion in upstate New York and built by the most famour Rockefeller of all, John D. Rockefeller. He had bought his in 1908 through Tiffanys in New York and has the original bill of sale. This one may have been for sale also at Tiffanys but possibly bought just earlier as the buyer may have only had room for one. Tiffanys said that the table came from the collection of Sir Purdon Clarke. Kykuit curators still had the bill and records of purchase from March 1908 at Tiffanys !!~
also see :

Sir Purdon Clarke was brought in specially to be their Furniture and Art expert and became their head Curator at the Metropolitan Museum . There is more info on him I found in Wiki. I always heard that Tiffanys sold antiques and furniture also. It must have been spectacular, their showroom !~

I wish I could donate it to the Rockefeller collection after I die, but the shipping would be too expensive I fear,