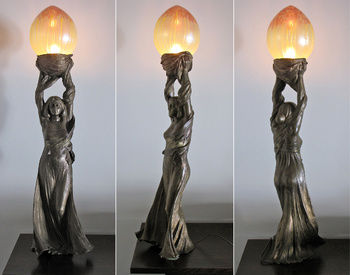 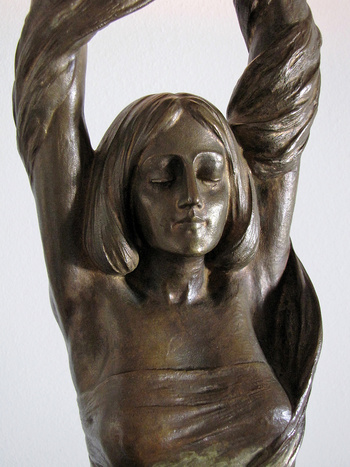 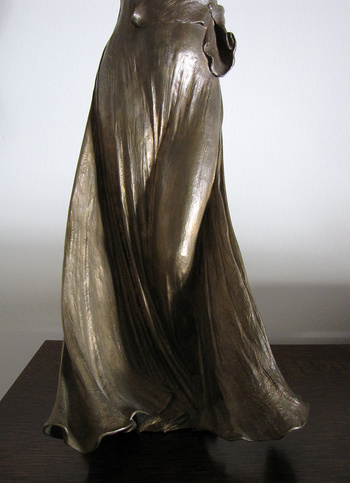 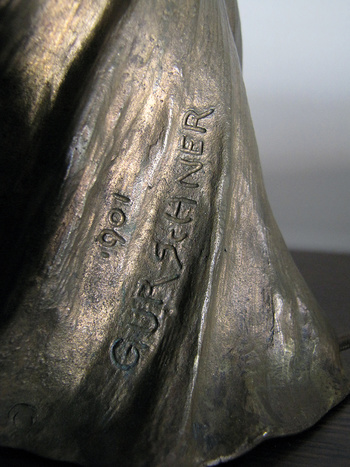 Monumental sculptural bronze lamp by Gustav Gurschner with period and appropriate Pallme König teardrop art glass shade. Signed in the lower edge of the draped gown region, “Gurschner 1901.” One other example of this lamp form is known (Berlin col.) and that piece has an overall verdigis patina and matching circular Pallme König shade in green and blue. Additionally, a different monumental maiden lamp of the same year and size by Gurschner sold at the Christie’s NYC 21/21 Historical Design sale in 2006, though that example had an egg-shaped Kralik helios shade. This example is missing its wooden or red marble base. Dimensions: 25”(H; 32.25” w/ shade) x 6.5”(W).

Contrary to prior auction listings and known Gurschner lamp examples, when he was not working with chambered nautilus shell as a source for his shades, his pieces most often are found with Kralik and Pallme König shades. Very few Gurschner lamps have documented and originally paired Loetz shades.

Gustav Gurschner studied at the Vienna School of Arts and Crafts from 1888 to 1894 and in Munich in 1896, before moving to Paris in 1897 and apprenticing under the Art Nouveau artists Alexandre Charpentier, Jean-Auguste Dampt and Ville Vallgren. Gurschner showed his works in numerous exhibitions; he took part regularly in the Salon du Champ de Mars in Paris and after its foundation in 1897, in the exhibitions by the Vienna Secession.