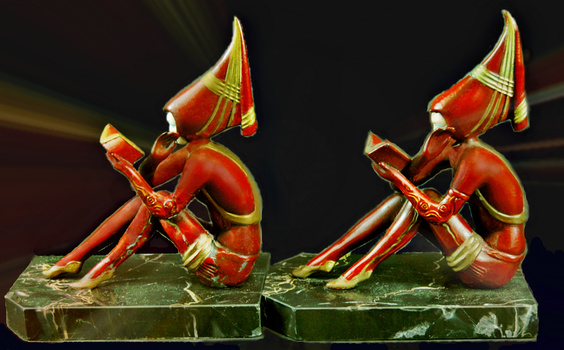 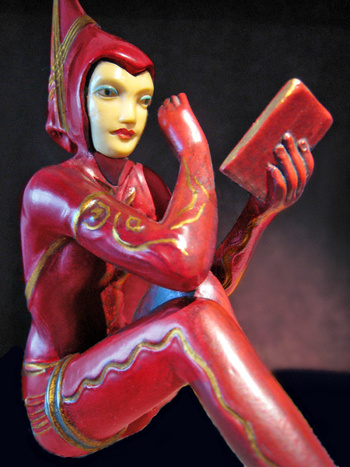 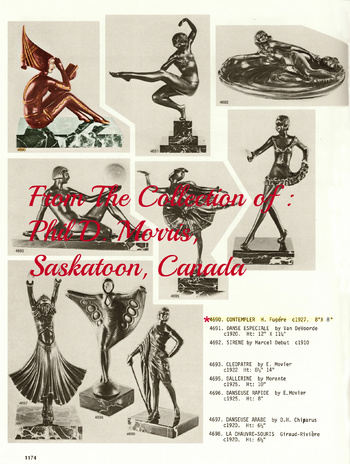 The bookends are in The Encyclopedia of Bronzes, Sculptors & Founders, 1830 to 1930 and the author was Harold Berman who was given the information that these were by Henri Fugere circa 1930. The Hirsch family gave him that information as they had the original signed moulds. Harold Berman was a big fan of the quality pieces of the Hirsch Foundry, particularly of the spelter statues they produced, all from original moulds, and the Encyclopedia that Berman wrote shows a lot of their higher end work also. Before they got together Stan Hirsch saw the exhibition of the Beaux Arts statues at the Metropolitan Museum in 1966 and realized he had the original moulds for some of the statues in his posession and the museum referred Hirsch to see Harold Berman who was writing his books on the Ency of Bronzes. Berman included over 140 works in his Encyclopedia. Harold Berman began a great friendship over the next 20 years with the Hirsch Foundry and that included him working in the foundry to produce bronzes. He had access to all the signed moulds and documented the dates and makers which DID NOT include Gerdago on this magnificent piece, as the mould was signed Henri Fugere !!~

The Hirsch Foundry had received some special information that the original moulds were buried under the floors of the bronze foundries during the war periods and after the second world war, with maps in hand they were dug up by the Hirsch family, who had the knowledge and maps of their whereabouts. This set has no date but I believe the Hirsch family were producing these especially after 1966, when they had a show showing their new work at that time. These bookends were likely just after the war in 1947 when some of the bookstores I have researched were selling them in their store. Originally Hirsch came on the market with them just after 1946 after the moulds were dug up. They produced some nice ones with alabaster bases and also nice black marble bases mainly for the earlier ones, using ivorine for the faces, molded separately at that timespan. In the later 70's to 81 or so by the time the foundry closed, they produced ones with metal faces and metal bases. A lot of the later ones have metal faces, so you have to check. They usually had a special switch on the cord no later than around 1960's-1970. Usually made of Spelter at the time the Hirsch Foundry started producing them. The bookends are roughly over 7 inches high and up to 10 with shade height if made into lamps. Around up to about 7 inches wide in length.