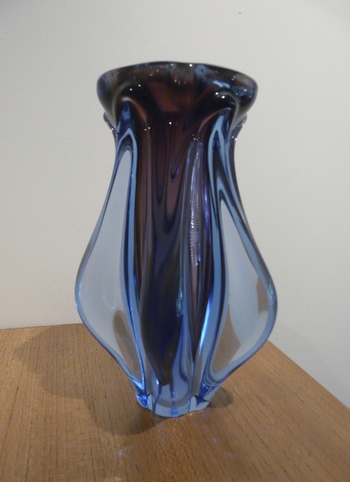 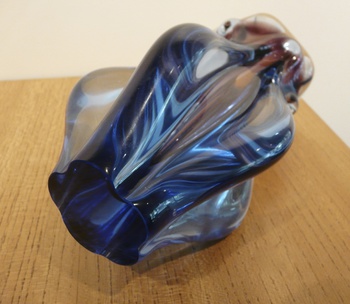 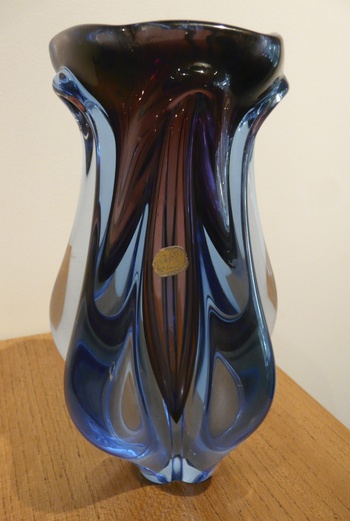 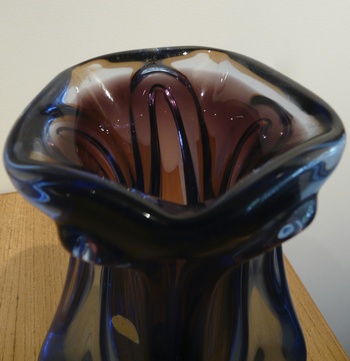 Tuesday mornings here in Sydney is when I head south on a trip where I know there will be fresh pickings! A couple of months ago I saw this vase in the window and did not resist the temptation to take it home. The price was right and the colour combination interested me. Pink and blue were a personal thing at the time.

I knew that it was a design of the Josef Michael Hospodka (* 01.21 1923 + 08.01 1989) for the Chribska glass firm. Hospodka was born in Svihov and was educated at the State School for Graphic Arts in Prague from 1938- 1940. He became a pupil of prof. J Holocek at the Academy of the Arts during the period 1940 - 1945. Afterwards he became a teacher at the glass school in Novy Bor where he headed glass cutting techniques section. He also worked at Chribska doing coaching classes in moulded glass. In 1956 Chribska opened a new glass furnace and got involved in new glass production techniques. In 1958 Hospodka became the head designer of Borske Sklo and later became a director of that great firm. From 1970 until 1985 he was the Director of the Glass School in Kamenicky Senov and up until the time of his death was designing freelance for Crystalex Novy Bor.

These vases are not to everyone's taste these days but the form is ubiquitous and that tells you of its popularity at the time. It is a weighty item: 2.1 kg or 4.65 lbs!

This is an unusual colour combination. The sommerso is a plum colour and the ground is blue all over. It retains its original sticker. I think it is an earlier version of the design. The company has many later catalogues on the net with the same shape but not this colour way. These extensive catalogues are all from later productions of the design.

I admit that I had to smile recently when cobaltcobolt referred to these Chribska pieces as being 'kitsch'.