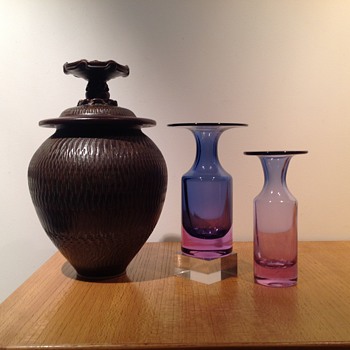 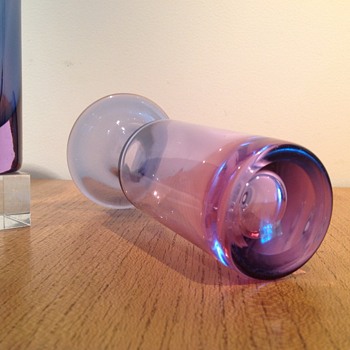 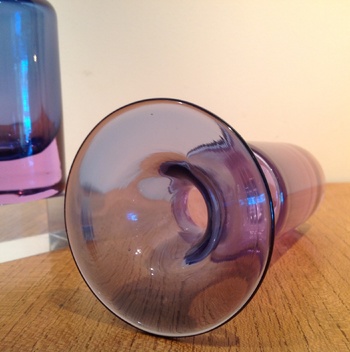 Another trip to a Vinnies that normally provides nothing ... I saw a familiar shape among some knick-knacks on a shelf. The colours were more subdued to the vase that I already had found a few years before. I used the loupe and saw the signature and I headed for the cashier.

This was well over a year ago now and recently I took it out of 'the shed' and took some pictures of it and the other neodymium 3539 vase by Tapio Wirkkala. Neodymium glass changes from the pink to blue in fluorescent light.

Both are signed on the bottom TAPIO WIRKKALA 3539.

I believe there are three shapes with this numeration.

Cobaltcobold has the other version of this vase on CW here:
http://www.collectorsweekly.com/stories/51120-tapio-wirkkala-small-vase-3539-for-iitta?in=activity

I like the combo of pink and blue and have put them with another vase by John Uithol that I posted recently.

This glass is called Neosin and appeared in the Iittala catalogue between 1966-69. I believe 'Neosin' is a derivative of the chemical agent Neodymium whose compounds were first commercially used as glass dyes in 1927. The color of neodymium compounds—due to the Nd(III) ion is often a reddish-purple but it changes with the type of lighting. As mentioned above this unique graduated colour changes in certain lights and no two pieces will be identical.