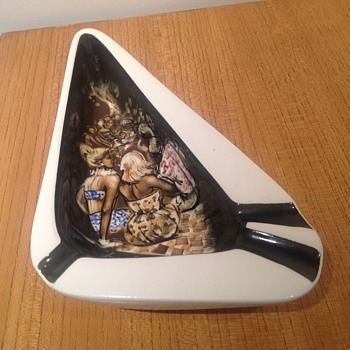 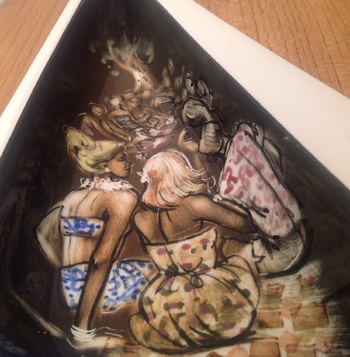 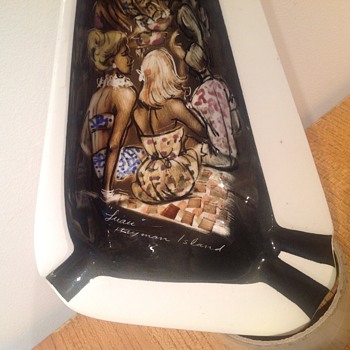 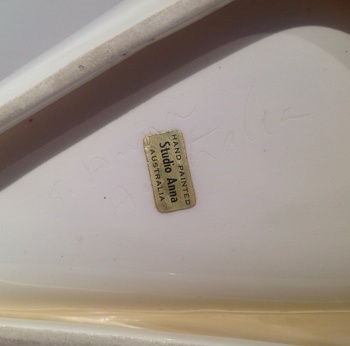 Thomas recently mentioned an Australian Island on a post of mine and I thought of this ash tray. Different island. But there are connections. In this case we have an example of internal tourism in the 1950's here in Australia. All celebrated on a hand painted on an ash tray made here in Sydney for the growing tourist market in northern Australia.

Hayman Island was one of the first tourist resorts on the Great Barrier Reef. It lies in the Whitsunday group, 70 km east of Bowen. It was named by Commander George Nares while carrying out a marine survey in 1864. In 1936 the Hallam brothers built a holiday resort there based around fishing. Guest accommodation was basic. But just twelve years later Ansett Airlines acquired the lease and built the Royal Hayman Hotel resort (1950) catering for 120 guests and included a swimming pool, elaborate dining room and live evening entertainment. Access to the resort was by Catalina flying boat or by bus and launch from Mackay airport.

Around the same time here in Sydney post war immigrants began a series of pottery ventures that supplied tourist items for the new resorts in Queensland around the Great Barrier Reef.

One of these ventures was Studio Anna. Karel Jungvirt arrived in Sydney in 1951 from Czechoslovakia and set up his factory in 1953 with his new wife Toni Coles. By 1957 they employed over 30 artists at their factory in Marrickville. One of these was Lillian Lilo Pakulski. Lilo has a characteristic style and signed some pieces with a flourishing L that you can see here in the word Luau. I like to think that that this is a piece of Lilo's work. In 1957 Lilo set up her own factory with her husband William Pakulski called the Little Sydney Pottery. Originally from Germany, Lilo arrived in Australia in 1946 and worked as a designer for Diana Pottery and Studio Anna Pottery, and the similarities in her hand-painted pieces from all three potteries is clearly evident.