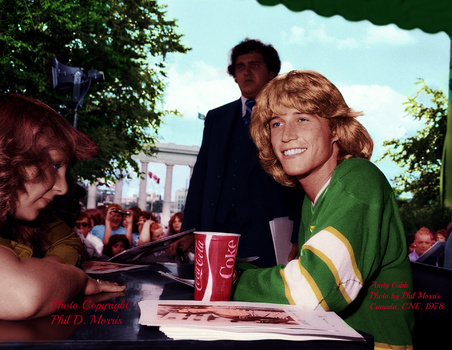 Andy Gibb, Photographed for Polydor Records, b&w, Hand Coloured Photo
I photographed Andy Gibb for Polydor back in late June 1978 as he was receiving his gold record for I Just Want To Be Your Everything.

The stage was about 16 foot square and 4 feet high. It was closed off while the gold record photos were being taken and I posted one here about 4 years ago. Polydor was not prepared at all it seemed. While we were waiting they gave Andy and myself a large coke with ice. He said we would have to share but I only had a sip as Andy needed it more to face the throngs. Andy was very nice and asked about my Camera, a NIKON F2SB, which I bought new in late 1976 when it came out. We had to wait a while while the rest was set up so we talked for about half an hour. We were both so young. I luckily had some of the best places to do the pics and just used a standard lens size as I was so close, around 3 feet for this one. There were many people, a crowd gathered around the stage.

After the Polydor promo pictures there was a meet and greet picture signing. By this time I had switched to black and white and this photo is now hand coloured. Andy sat at the desk and he had the only chair. The people were paired in twos KNEELING in front of the desk, at the edge of the stage with blankets in front of stage, very messy looking. Polydor was so unprepared as if they expected someone else to do the work. After Andy signed the photo he gave each lady a kiss on the lips, my negatives show. it was a relief as the signing did not last a long time as Andy had to get ready for his evening performance. I believe it was his first time in Canada. This may have been a favourite t-shirt of his and there is a photo out there of Andy sitting between his parents holding a gold record and wearing this t-shirt.

I got home late around 6:30 and there were people sitting around waiting for me, as it was my birthday. A surprise birthday party. I did not tell anyone where I had been.