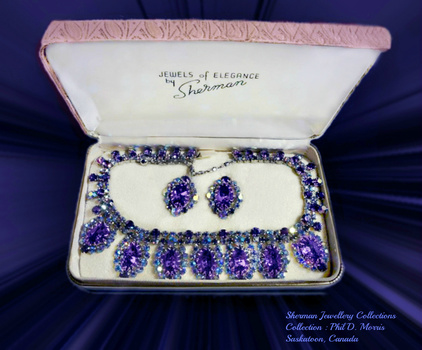 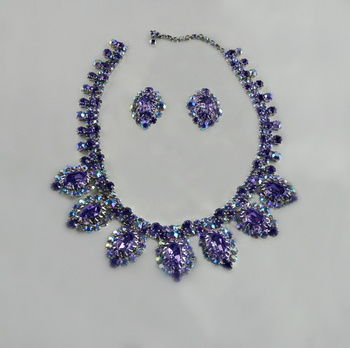 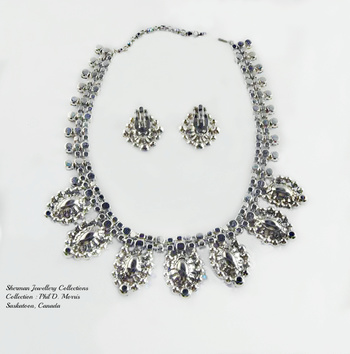 RARE Gustave SHERMAN SIGNED SHERMAN NECKLACE MID 50's, A RARE SET
I obtained this the end week of February 16th 2020. I realized it was a rare necklace with some points which are easy to see. When Sherman used the rare large stones he used around 15, yes 15, prongs to hold the large stones and also the smaller stones have 4 prongs holding the stones as Sherman DID NOT use glue at all in his rhinestone creations. With all those prongs used to hold the stones the work here was intense. The cost was expensive but it is a harder set to aquire, and much desired by collectors !~

The construction is complicated and with the rare purple and larger oval stones using all the many prongs the set would have been made in smaller numbers, with all the intensive labour this set commanded, the price would have been higher also. These days such a set would be hard to reproduce in any number and quite expensive to manufacture !~

What I am left with to say is "absolutely breathtaking !" This extraordinary necklace is Sherman at its best. Gorgeous cut larger stones used in purple surrounded by dozens of irridescent blue smaller stones in floral sprays. Usually Sherman might have used one grouping of stones like this to make one of his necklace sets, but in this case seven - unheard of !~ This necklace is one of his most impressive and shouts Simply Fabulous. Done in his best rhodium plating. I have had the smaller sets before in purple with green. There is one in the book of one that is similar but not quite the same.