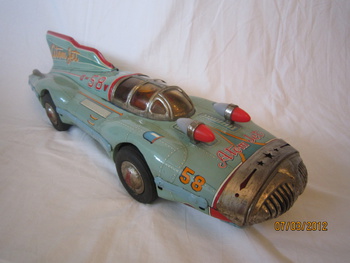 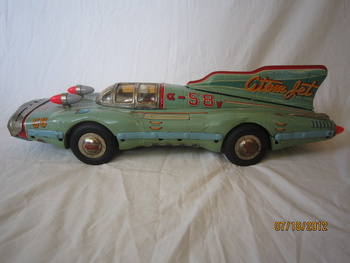 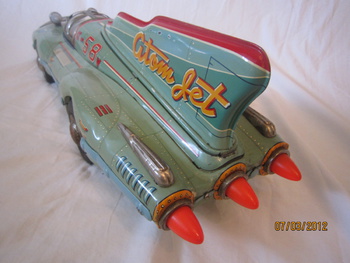 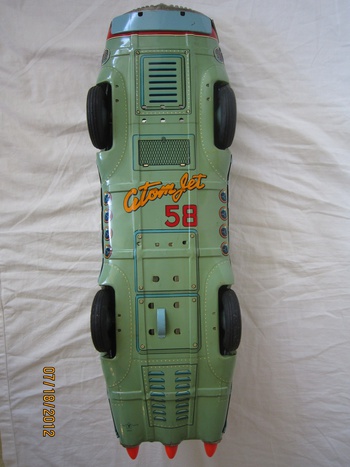 Here is a recent find of mine that I thought I would share. Toy collectors out there and fans of tin litho items should enjoy this one. : )

The following is taken from a DFW Elite Toy Museum Press Release which highlights the significance of this item:

/24-7PressRelease/ - DALLAS, TX, August 16, 2007 - The DFW Elite Toy Museum is known for its rare cars, but the Atom Jet Racer just might be the most hard-to-find piece in the entire collection. In fact, with a scarcity rating of 10 on a 10 point scale, the jet racer is next to impossible to find anywhere except on display at Fort Worth's premier toy museum. At more than two feet long, the collectible toy is a favorite with visitors because of its unusual size and exquisite workmanship.

"It was made in Japan in the 1950s and was one of the last large tin friction toys ever made," said Rodney Ross, museum curator. "Back when Atom Jet Racers were being made, they were pretty inexpensive tin toys - just a cheap toy that kids would play with and destroy. Because of that, very few survived."

The scarcity of the Atom Jet Racer has made it even more sought after by collectors of large tin toys. Made by the famous Japanese toy maker Yonezawa, this beautifully lithographed tin racer is 27 inches long with a friction motor and a tiny, goggle-wearing driver in an enclosed cockpit. Part racer and part jet, this hybrid toy must have been captivating to young imaginations.

"If I had to choose a favorite out of all the toys at the DFW Elite Toy Museum, I would choose this one," Ross said. "The museum has some of the finest antique toys in the world, but the Atom Jet Racer is exceptional. "

In its heyday, the Atom Jet Racer was equipped with sparklers inside the body that would shoot sparks out the rear of the jet as it was rolled across the floor. Although the sparklers have since burned out, the rest of the vehicle remains in tip-top condition, right down to its rubber tires and chrome hubcaps.

"Back when Yonezawa was making these, kids had no idea of how special a toy they were playing with," Ross said. "To them, it was just another toy to destroy. To us, as collectors, the Atom Jet Racer is amazing because of the exceptional workmanship it required to create a toy of its caliber."

"It is easy to see why it has become one of the most sought-after toys for collectors today."

It is about 27 inches across and in awesome shape for its age which is huge! Everything works on it as it should with it also being complete with all the original items. The colors are still bright and vibrant. The details of the driver and his controls are impressive in the cockpit.

It was made by Yonezawa in Japan!! A really cool piece. Thanks for looking my friends and we will meet again! Happy 4th of July to all of you as well.... : )