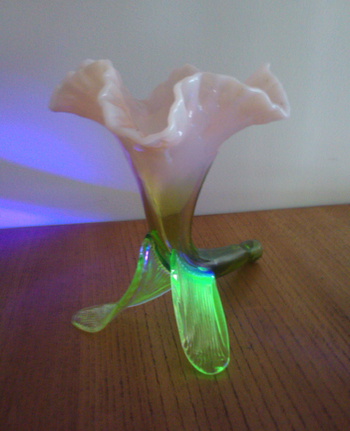 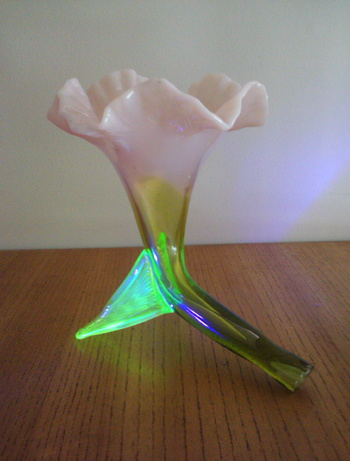 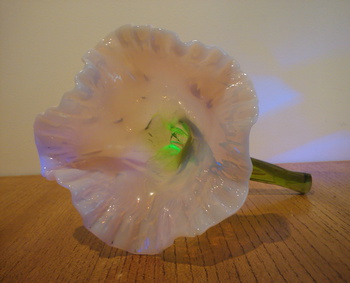 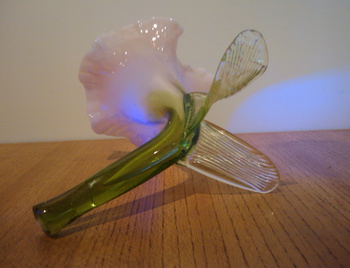 Three years ago Alfredo Villanueva posted information about these Kralik Floriform Blossoms here on CW. He included pictures and text from the 1900 Butler Brothers Catalogue: “Stem and open blossom pattern. Crystal glass in combination of beautiful tints and colors, such as shaded green and crystal and shaded ruby and crystal in fantastic floral shapes with open petals and leaf feet and long stem Height about 7 – inch. 1/6 doz in pkg., assorted ……… 4.20”.

Last Sunday I was able to pick up one of these here in Sydney as an example of a stemmed opalescent blossom shaded to green with tooled feet that react vividly to black light even in daylight.

The blossom dates to 1900 and was made by a firm called Wilhelm Kralik Sohn in the Czech Sumava region at a factory known as Eleonorahain (aka Lenora).

Wilhelm Kralik Sohn was a company set up after Wilhelm’s death in 1877 by two of Wilhelm’s sons Heinrich and Jan. In 1882 Heinrich became sole owner of the Glashütten Ernstbrunn and Eleonorenhain and brought them together under the name of "Wilhelm Kralik Sohn"... a tribute to his late father. Heinrich was joined by his cousin, Wilhelm Mathias Kralik the head of the Novy Svet glassworks at that time. He arrived in Sumava with many of his co-workers from Harrachov. Wilhelm Mathias Kralik as the new business director "dramatically changed the production range of the glassworks, which hitherto mainly focused on sheet glass: the main orientation was producing the fashionable smelt-decorated glass with naturalist motifs, thus meeting the demand of European customers. This guaranteed the sales in many European countries.

The Lenora decorated glass was initially very close to the Harrachov examples mainly by its subdued and dark shades of olive green, brown and topaz. These patterns usually were naturalist decorations in the form of foliage and flowers and small insects, but also snakes and lizards. The Lenor glassworks, however, found its unique artistic expression over the time, based on specific décors as flat pressed flowers with striking color contrasts and symmetrical arrangements. Lenora moreover produced a wide scale of smelt-decorated vases and jardinières, decorative table objects in the form of flowers and petal-shaped lampshades. The glassworks experienced its highest prime during the 1890s, and many characteristic patterns and décors of the smelted-decorated glass were produced as long as until the 1920s, some of them even during the 1940s. After the Second World War which heavily affected the glassworks, the company was nationalized and became part of the enterprise Bohemian Crystal Glassworks [Sklarny Cesky kristal].”
http://www.prague-art.cz/catalogue/producers/42-wilhelm-kralik-sohn/