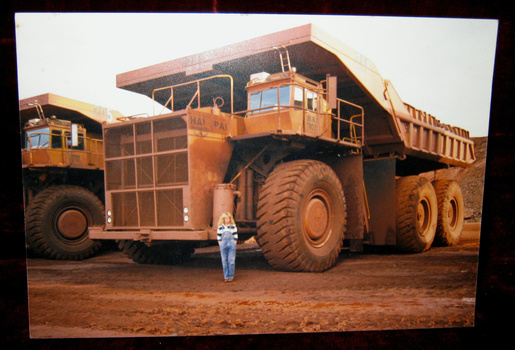 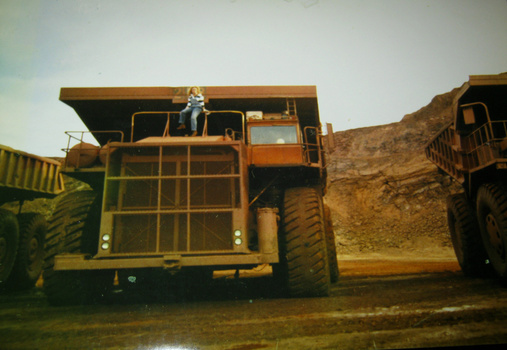 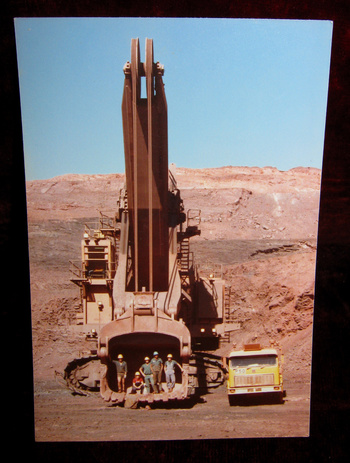 Just thought I'd share this photo with you, I found it while re-arranging my bookshelves trying to make space for my vases.

For three and half years this was my job, I drove this Wabco truck 200 toner (carrying capacity, supposedly!!) round an iron ore mine in the top end of Pilbara region of Western Australia. I used to wake up each morning looking forward to going to work. That's me sitting waaaayyeee!! up there! - waiting to be picked up and in one of the shovels that used to load me.

The company I worked for was BHP and it had a huge open cut mine in Newman, a small mining town on the edge of the mine set up especially and only for mining personnel.

This has been taken from Wikipedia...

BHP's operations in Newman date back to 1968, when the Mount Whaleback mine was opened, the biggest single-pit Open-pit iron ore mine in the world, developed originally by United States company Bechtel Pacific. A new town, Newman, was constructed, as well as a 426 kilometre railway line, the Mount Newman railway. The first train left Newman on 1 January 1969 and the first shipment of Newman ore left port on 1 April 1969 on board of the Osumi Maru.[6] Newman remained a "closed" company town until 1981.[4]