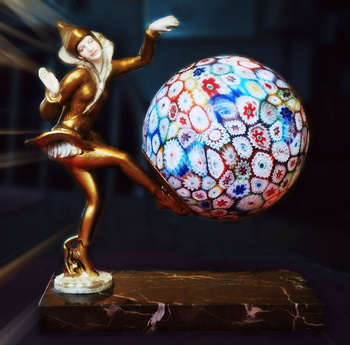 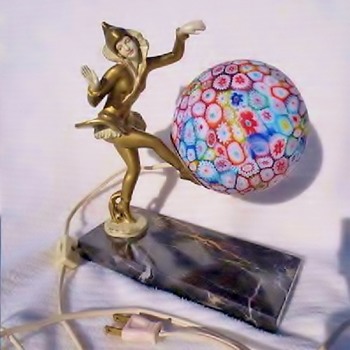 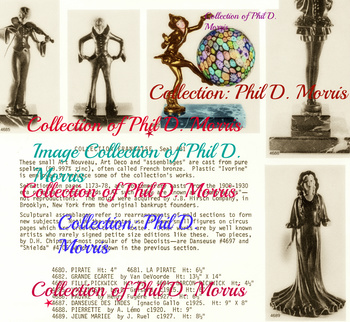 This is NOT a Gerdago Girl. It is Danseuse Des Indies by Ignacio Gallo and documented by The Hirsch Foundry in the book by Harold Berman called The Encyclopedia of Bronzes Sculptors and Founders, page 1173. These "assemblages" were cast in 99.997% pure zinc known as spelter but now known largely as "French Bronze."

This example is different from other examples in my collection in several significant ways. First the hands are white, usually they would be gold as the original patina. Another big variation is the hat which is incised on the sides normally but this example is smooth of those incisions. Also very unusual is the face is looking more at the viewer instead of slightly downwards and away, as in all my other examples.

The Hirsch foundry had special knowledge about the whereabouts of many moulds that were hidden just before WW2 by the original bankrupt founders, and after the war had them dug up and shipped to NYC. They used these moulds and began large production of some of them in 1946 and 1966, after a big show they held showing some of their new exciting discoveries.When they first went to Paris to dig up these valuable moulds, they may have not known that it would take them 20 years to find all of over 2000 parts and bring them back to the U.S. As of 1980 most had been put together and they still had several years to go to finish the whole Collection Francaise.

Those 2 dates are indicative of a large import business going on around the world, especially in Italy and North America where countless businesses had their beginnings is 1946 and later on in 1966 for new lamps especially. You usually find these examples in good condition since they were manufactured after the wars. 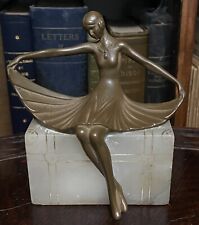 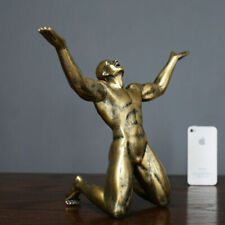