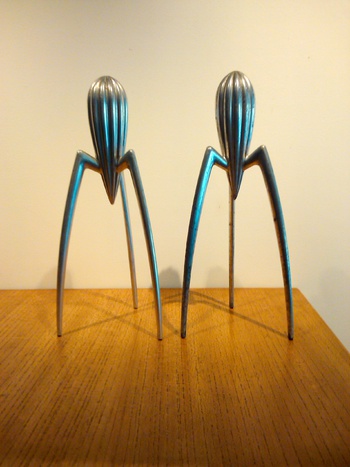 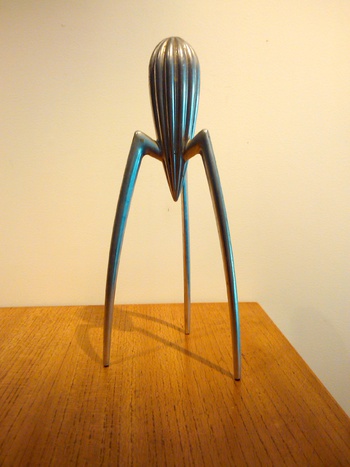 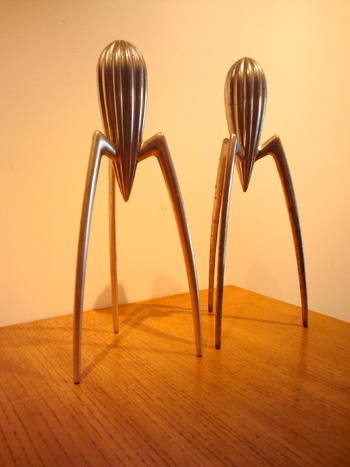 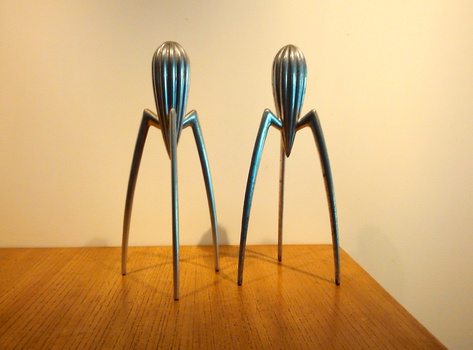 Yesterday I headed to Surry Hills Market for the first Saturday of the month regular hunt. I have given up on the idea of being there at 7.00 am. You get there and there is nothing.

But ….
I arrived at 9.30 yesterday and for the second month running saw that the market was smaller than usual because they are trying to protect the grass that had been newly re-turfed. Some regulars were forced into an unfamiliar area and were late starting to unpack. There was a prevailing sense of frustration in the air.

But I found two items of interest.
The first was a Juicy Salif!
I had bought one in Italy at Stresa in the '90's.
JS was coming home to meet his older mate!

When I asked the woman I asked the lady: "How much is the lemon squeezer?", she replied "Is that what it is?" I had asked that question rather than saying to her "how much is your Alessi Art Object, ma'am?"

Statement of significance:
The 'Juicy Salif' lemon squeezer was a classic of postmodern product design of the 1990s. Designed by the internationally renowned French designer Philippe Starck for the Italian firm Alessi as part of the 1986 Project Solferino (a collaborative project between Alessi and Francois Burkhardt from the Centre de Creation Industrielle at the Beabourg in Paris), the 'Juicy Salif' was among the first of Philippe Starck's designs for Alessi, along with a kettle, wall clock and colander.

The design of the 'Juicy Salif' is innovative, futuristic and relatively functional. As opposed to other citrus squeezers, the 'Juicy Salif' allows juice to flow straight into a glass (pips and pulp included!), rather than passing through a sieve into a dish, and provided a simplified alternative design option for an everyday kitchen task. The form of the squeezer was inspired over a lunch of squid garnished with lemons on the Isle of Capri, and therefore has much in common with this curious marine critter - long legs and an inverted, drooping body. It is an excellent example of innovative design with a sense of humour and of high production standards of mass market articles, for which Alessi is so well known, and which helped to position the firm at the forefront of international design from the 1980s.

The 'Juicy Salif' became a bestselling item for Alessi. It represents one of Philippe Starck's most influential and controversial designs and today, continues to serve as a status symbol, particularly among the intended market of young, middle-class professionals.

Production notes:
The 'Juicy Salif' lemon squeezer was designed by Philippe Starck in France and manufactured by Alessi in Crusinallo, Italy in the 1990s.

Alberto Alessi commented on Starck and his design of the 'Juicy Salif' as follows: "I cannot help thinking of Starck as the 'designer terrible' of our decade. He is a living example of my dream: design, real design, is always highly charged with innovation towards the word of manufacturing trade, bringing results that need no longer be justified solely on a technological or balance sheet level. A true work of design must move people, convey feelings, bring back memories, surprise, transgress...in sum, it has to be poetic. Design is one of the most apt poetic forms of expression of our day. And I know that this great visionary still has plenty of surprises up his sleeve..." (A. Alessi, 'The Dream Factory, Alessi since 1921', 1998, p.74)